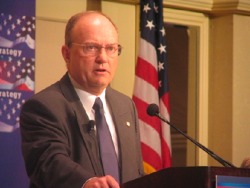 is a retired U.S. Army Colonel.  He is also the former chief of staff to Secretary of State Colin Powell.  Wilkerson was part of the preparation of Colin Powell for his February 2003 presentation to the United Nations Security Council which helped pave the way for the invasion of Iraq.

Subsequently, Wilkerson has stated that the information on which this presentation was based was false.  Powel, he has said, was not made aware of doubts about the source of the information at the time.  Wilkerson has also publicly spoken out about the poor planning and execution of the Iraq War.  He is a strong critic of the decision-making process of the Bush Administration largely taken over by Vice President Dick Cheney and Donald Rumsfeld.

Wilkerson has appeared on Bill Mahrer several times, most recently in June 2018 with Jennifer Rubin.  On that show, Wilkerson pointed out that the Intermediate Nuclear Forces agreement is in danger of collapse.  We should, he argued, be talking with the Russians.

As the Guardian (Borger, 4/17/2018) has pointed out: “the 2010 New Start treaty limiting the deployed strategic warheads and delivery systems of the US and Russia, will expire in February 2021, unless urgent steps are taken to extend it.”

Wilkerson, however, has very little confidence that this president at this time could cope with these issues.

Wilkerson and Powell were profoundly disillusioned by their experiences within the Bush Administration.   Wilkerson can always be counted on to speak his mind and speak truth to power.