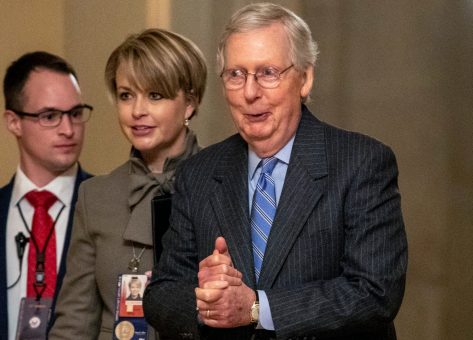 I can’t see that there’s anything in this stimulus bill that prevents it being a slush fund give-away for big business.  Because of objections, there is now talk of an Inspector General and a panel to over see the distribution of the funds, but no assurance that these funds, for example, won’t to directly into the Trump properties and businesses.

This is outrageous.  What I am expecting is to see somebody like the snake-in-the-grass Chris Coons to come out with some kind of watered-down, meaningless “compromise” that will allow Republicans to steal billions.

I’m disgusted with the Democratic Party, as usual.

On top of everything else, why isn’t somebody from the Democratic Party, somebody who has some moral authority, somebody who is willing to fight for regular people, not out in public every day, explaining how this crisis is being used as a giant rip-off for the 1%?

This is a country that has degenerated into a situation where it is considered a serious proposal to allow poor, working class and elderly people to die in order to protect the stock market for the wealthy.