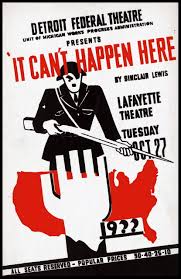 In 1935, Sinclair Lewis published a semi-satirical novel entitled “It Can’t Happen Here.” The novel is designed to portray the take over of an authoritarian government in the United States. This is not an easy read, and if you aren’t interested in the parallels between Lewis’ novel and the Trump election and administration, you probably won’t want to wade through it. Lewis, reportedly, took much longer to research the book than he took writing it (four months) and it suffers from lack of character development and plot drift. A play was based on the book was produced just after Trump took office. And, some of the parallels are interesting.

Lewis predicted that the current anti-intellectualism would be part of the authoritarian program.

…the Americans were the first to start new and completely orthodox institutions, free from the very first of any taint of “intellectualism.”

“…the morning papers had been combined by the government into one sheet, rich in comic strips, in syndicated gossip from Hollywood, and indeed, lacking only any news.”