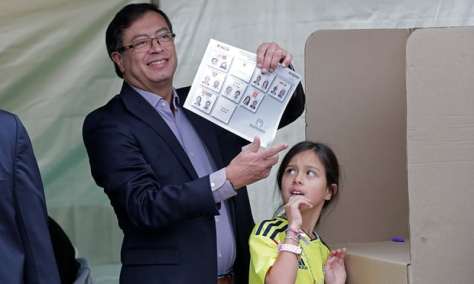 Gustavo Petro won over 41% of the vote in Colombia’s most recent presidential election.  This was called by Miguel Salazar of the Nation Magazine, “an unprecented electoral feat for Colombia’s left after decades of isolation and political assassinations – his candidacy became the most successful leftist campaign in modern Colombian history.”

“There is no defeat here,” Petro tweeted shortly after the election results were announced.

But, the election of Ivan Duque, the candidate hand-picked by former President Alvaro Uribe and described by some as a political nobody a short time ago, is no cause for celebration.  Duque, according to Salazar, “…supports a return to harsher measures for combating drug production and consumption in Colombia, including the recriminalization of minor drug offenses and a return to aerial spraying of coca crops, a hazardous practice that was halted under president Santos despite pressure from Washington. Over the past few months, Duque has also supported partnerships between the private sector and the government’s educational branch, and he has vowed to continue the mining and oil drilling operations that have contributed to global warming and perpetuated violence across the country. He’s allied with ultra-conservative politicians such as Alejandro Ordoñez, a former seminarian who opposes LGBT rights, and Marta Lucía Ramírez, a staunch opponent of women’s reproductive rights who will serve as the first female vice president in Colombian history.”

The election of Duque demonstrates once again the strength of Colombia’s conservative elite.

“Politically, Iván Duque is a nobody,” said Sandra Borda, a political scientist at Los Andes University in Bogotá and quoted by Salazar. “He owes every single vote to (former president) Álvaro Uribe.”

See:  Salazar, Miguel (6/20/18) Once again, the right wing wins in Colombia, Amid divisions on the left.  The Nation Magazine.