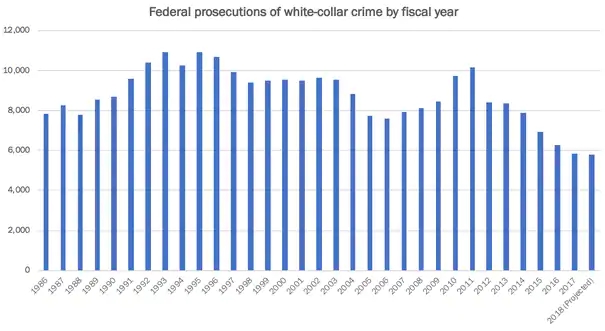 Catherine Rampell reports that this year the United States is on track to prosecute the fewest white-collar and public corruption crimes on record.  And, it’s not because there aren’t crimes out there to be prosecuted as everyone who reads the news knows.  Syracuse University has published data cited by Rampell indicating that this fiscal year the fewest white-collar prosecutions on record will be persued (1986 is the first year available).  The prosecution of official corruption is almost as bad.  This is rivaled by prosecutions of tax-related frauds.  The charts below don’t even account for population increase.  If they did, the decline would look worse.