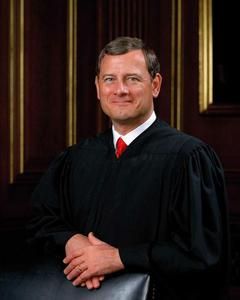 We must continue fighting the Roberts Court.

The U.S. Supreme Court today issued a ruling that would allow the Trump administration to bar most Central American migrants from seeking asylum.

“They’re fleeing from violence and poverty,” notes a representative from the ACLU, referring to the migrants.  But, over on Fox News, people seeking asylum are being presented as drug dealers and participants in human trafficking.

The new rules sought by the Trump Administration forbid asylum applications from those who have gone through another country and not been refused asylum in that country.  In other words, people who have not sought asylum in the third country.

In July, the Roberts Court allowed Trump to begin using $2.5 billion in Pentagon money to construct a barrier along the Mexican border.

Last year, the Roberts court upheld the ban on travel from several predominately Muslim countries, rejecting the argument that the ban was targeting a religious group.

The Courts did not even come up in the questions asked by the ABC commentators in the Democratic Debate.  But, any candidate must come up with a plan for what Democrats propose to do about the packing of the court by the Republicans and the effects of the Roberts Court.