The contest for control of the Democratic Party between left and center is continuing apace. The latest battleground is over a handful of minority Democrats being groomed by the centrist establishment to run for office: Sen. Kamala Harris (D-Calif.), Sen. Cory Booker (D-N.J.), and former Massachusetts Gov. Deval Patrick.

If the center wants to win over a suspicious left, they can start by clearly explaining their policy orientation, particularly in areas where they might have fallen short by the supposed standards of the modern Democratic Party — which all three of the above candidates have done in various ways. If they want to deepen divisions, they can use cynical accusations of bigotry to try to beat back any leftist challenger.

Let’s take each in turn. The former attorney general of California, Harris is mistrusted by the left mostly because of her roots as a prosecutor. The Black Lives Matter movement has put anyone with law enforcement history under close scrutiny, and California’s criminal justice system is notoriously brutal (though it has improved recently). While she is obviously no Jeff Sessions, Harris has sometimes displayed a rather Hillary Clinton-esque tendency to say the right thing but not follow through in a vigorous way. Most notoriously, she refused to prosecute Treasury Secretary Steven Mnuchin’s old company OneWest for numerous instances of almost certain illegal foreclosure, against the advice of her own Consumer Law Section, and has so far refused to say why. (She was also the only Senate Democratic candidate to get a donation from Mnuchin himself in 2016.)

Booker is mistrusted because of his ties to Wall Street. Most notoriously, when President Obama attacked Mitt Romney during the 2012 campaign for his long career as a bloodsucking financial parasite, buying up companies only to strip their assets and drive them into bankruptcy, Booker defended Bain Capital on Meet the Press. Why? Because New Jersey is just across the river from Manhattan and both parties are drowning in Wall Street cash.

Patrick is least trusted of all because he actually works for Bain Capital as a managing director. If he were to run for president, as Obama’s inner circle is apparently urging him to, President Trump would just have to copy-paste Obama’s 2012 ads.

In other words, there are quite substantive reasons why a leftist might not trust any of those candidates. The probably accurate perception that all three candidates are being groomed by the same big-money donors that clustered around Hillary Clinton will only deepen the divide, because it suggests that — like pro-union rules, or the public option in ObamaCare — any adoption of Sanders-style proposals are mostly bait to be cast aside when it comes time to actually pass something.

If they want to win over the left — and Harris, who has expressed at least mild support for tuition-free public college (for families with income less than $140,000), a $15 minimum wage, expanded Social Security, and Medicare for all, would probably be the most credible person to attempt this — they need to first explain their recent history.

Second, and perhaps more importantly, they need to make a symbolic rhetorical break with the despised donor class. The left generally likes Elizabeth Warren because she ferociously criticizes Wall Street and corporate abuse. Adopting a harsh anti-economic elite line will reassure young Sanders Democrats that anti-establishment policies aren’t just window dressing. Meanwhile, steps like refusing to take PAC money and running mostly on small donors will signal independence from the donor class (and as Sanders discovered, might actually lead to a gusher of campaign cash).

But if they just want to have a retread of the 2015-16 primary, the center could just try to win dirty. The left, they might say (working hand-in-glove with sympathetic columnists), just doesn’t like minority or female candidates because they are racist and sexist.

I would bet quite a lot of money the centrist Democratic establishment will opt for the latter strategy. Indeed, some are already doing so — like Neera Tanden, head of the Center for American Progress, elite Democrats’ in-house think tank.

That would be pretty rich coming from the crowd that shamelessly leveraged Islamophobia to keep Keith Ellison — probably the left’s second-most trusted politician, after Bernie Sanders — out of the chair of the Democratic National Committee.(Update: Neera Tanden contacted us after this story was published and asked that we clarify that she personally defended Keith Ellison from these attacks.) Indeed, in other forums the left is simultaneously being criticized for being too sympathetic to radical Muslim and black activists. On Tuesday the neoconservative Bari Weiss lambasted leftists for, among other things, associating with the Muslim activist Linda Sarsour (for being anti-Zionist) and cast their praise of the exiled black radical Assata Shakur as love of a cop-killer — conveniently neglecting to mention that the reason people support her is their belief that she was framed for the murder.

That extraordinarily cheap attack at least has the actual history of social justice activism straight, in which the left has long been leading the charge and centrists following (often very far) behind.

At any rate, if I had to guess, I’d say we’re in for a rather bitter fight for supremacy over the Democratic Party between big money elites on one side and Sanders Democrats on the other. But for actual individuals like Harris, it’s worth considering the extremely weakened state of the party elite compared to 2013. Clinton’s defeat completely shattered the elite’s reputation for competence, and they will have a much harder time beating back a left-wing challenger in 2020. Even on purely tactical grounds, it probably makes more sense to permanently throw one’s lot in with the left. 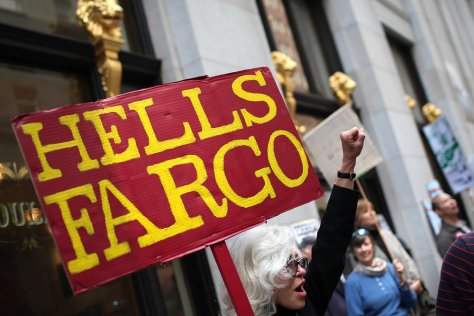 For years after the banking crisis, Wells Fargo went out of its way to present itself as one of the good banks.  According to David Dyan, a reporter who writes about Wells Fargo, part of the bank’s media strategy was to promote itself as a safe, customer oriented bank, not involved in pesky old derivatives, just a friendly bank out to provide the best service to customers.

In the last few years, all that has fallen apart.

In 2016, when the reporting first started, it appeared that some 2 million fake bank accounts had been opened for Wells Fargo customers without their knowledge.  Not long afterward, the figure being reported was more like 3.5 million.  Representatives of the bank were opening additional accounts for existing customers without telling them.  After a while, the CEO for Wells Fargo claimed that the problem was just a few bad apples and fired 5,000 lower level employees.  (That’s more than a few bad apples by my count).  Then, it came to light that these “bad apples” independently were being pressured to open an average of eight bank accounts for every unsuspecting customer that came into the bank.  The employees themselves were being threatened with firing if they didn’t meet the quota.  On top of the problems caused individuals who wound up with these extra accounts, representatives were using this supposed growth in accounts in order to talk other investors into investing with Wells Fargo.  The line was something like this:  We’re doing great.  See how many accounts we have and we’re expanding every quarter with more and more accounts.  The only problem was that the accounts were bogus.  So, Wells Fargo was lying to its account holders and also to their investors.

Then, in August of 2017, Wells Fargo was forced to admit that it had earned some $73 million dollars by pushing redundant car insurance on more than 800,000 unsuspecting borrowers.  Wells Fargo partners with car dealerships to arrange for car loans.  But, when the loans were set up, Wells Fargo added a collision insurance policy to every loan without informing the customers.  So, customers were being charged extra in every car payment for insurance they hadn’t taken out and were perhaps already paying for through another insurance company.  The charges were being automatically deduced out of their accounts at Wells Fargo.  According to a report Wells Fargo itself commissioned, some 800,000 borrowers were affected by these bogus insurance policies.  Wells Fargo now is contesting the report it commissioned.  Between 2012 and 2017, some 1 million people were affected by unnecessary delinquencies and even repossessions of automobiles because of the scam.  According to the New Republic, this caused a quarter-million delinquencies and 25,000 wrongful auto repossessions.

These scandals are just two of the scams operated by Wells Fargo over the years.  The company has also been accused of adding extra fees to mortgages and changing the terms of mortgages without informing customers.  In other cases, the company was found to have been using investor money to pay legal fees in cases against their own investors.  Wells Fargo has been charged with secretly changing loan terms on mortgage borrowers in bankruptcy, and falsifying records so that delays caused by the bank were charged to mortgage applicants.

In 2010 Wells Fargo, along with other banks, was sued for a practice called “debit charge reordering.”  This scam was designed to increase the bank’s profits from overdraft charges by rearranging the dates on which charges were recorded.  If, for example, a customer had $100 in the bank and wrote three checks in a day, one for $10, one for $15, and one for $125.  The bank would reorder the drafts, putting the $125 charge first.  Therefore, instead of paying one overdraft payment, the customer would be paying three overdraft payments.  All the banks involved in this scandal settled and replayed customers EXCEPT wells Fargo.

Wells Fargo has argued in three court cases that they are not responsible for settling with customers because there is a mandatory arbitration clause that applies to the customer’s agreement with the bank.  Wells Fargo is saying that the customers can’t band together to sue them because of this arbitration agreement.  Three different judges have told the company that this argument will not stand.  The reasoning is that Wells Fargo had the chance to arbitrate with customers, but instead went to court.  When the bank saw that the court case was going against  them, they then tried to say that they wanted to go back and arbitrate.  A fourth ruling is due this month (in the 11th circuit court of appeals) on whether Wells Fargo will be allowed to get away with this legal tactic.  In the meantime, Wells Fargo has held on to customer’s money for six years delaying settlement on the case.  So, Wells Fargo is essentially operating with an interest free loan from the very people it defrauded.

While all this is going on, I have noticed that Wells Fargo is showing up as a sponsor in numerous arts events, trying to rehabilitate its image.

The bank is a serial corporate criminal that has screwed over millions of Americans. Here’s what the government should do about it.

Sam Seder is a New York based political talk show host. Seder’s daily podcast, The Majority Report, has been voted Podcastawards.com best News/Politics podcast for four years running. It airs live at www.majority.fm. Seder is an MSNBC contributor and has appeared regularly on nearly every major cable news outlet.

Seder is a former Air America Radio host,  including co-hosting The Majority Report with Janeane Garofalo, and the web only, video show, Break Room Live with Marc Maron. Seder also served as the Editor in Chief of AirAmerica.com.

This is a BBC article explaining some of the background of the situation in Venezuela.