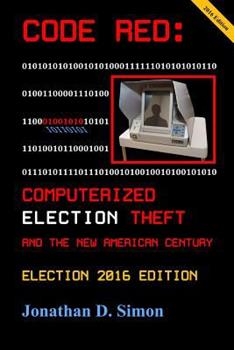 If you have not started following Jennifer Cohn on Twitter, you should.  She is essential if you want to understand what is likely to happen in the 2020 election with election security.

Among the things you should note for today are:

Jennifer Cohn recently interviewed exit-poll specialist Jonathan Simon.  This is an interview which is essential to understanding what is likely to happen in 2020.  The Republicans have thousands of initiatives proceeding throughout the system and throughout the country to ensure a Republican victory.  While the Democrats and the media seem occasionally concerned with the possibility that Trump may refuse to leave office should he lose, they refuse to confront what evidence from 2000 clearly shows, i.e., that the Republicans will run every scheme imaginable to steal the vote itself.

People simply do not want to confront the fact that the election itself will be fraudulent.  The following are excerpts from the interview by Jennifer Cohn.

“We appreciate you guys. We really do.”

That’s what the police officers in vehicles told a gathering of armed men on the streets of Kenosha, Wisconsin while throwing them bottles of water.  One of those men then killed two protesters and seriously wounded another.

After shooting a protester, the assailant made a call saying “I just killed somebody.”  He then ran away while other young men tried to save the protester’s life.

The shooter, Kyle Rittenhouse, approached police with his arms up and his AR-15 gun strapped around his chest.  He was virtually ignored and allowed to return home even though other protesters were telling the police that he had just shot someone.

Knosha County Sheriff David Beth offered no explanation as to why Rittenhouse was permitted to leave the scene of the shootings.  In addition to being identified as a shooter out after curfew, the 17-year-old was not old enough to legally carry the weapon he had.

When asked about Rittenhouse leaving the scene, the sheriff said:  “I don’t have a clue.”  He later added: “I don’t even know the man’s name.”

Just hours before the shooting, the Kenosha Guard, a local militia group issued a “call to arms” over Facebook.  This call was amplified by the conspiracy theory website, InfoWars.  They urged private citizens to arm themselves and come out in defense of private property.

Sheriff Beth said at a press conference that the group sought to be deputized, a request he claims he rejected.  But, you only have to watch Rittenhouse walking toward the police, an AK-15 strapped around his chest to realize that he assumed the police would regard him as an ally.

“Mike German, a former FBI agent who went undercover in far-right groups in the 1990s and who is now at the Brennan Center for Justice, noted that law enforcement’s tendency to back off in the face armed right-wing protests was evident in altercations during Trump’s 2016 run for office, and has continued throughout his administration. “To see the police continuing to treat these far-right militants as friendlies is troubling,” he said.” (Quote from the Intercept)

Posts Rittenhouse made on social media indicate that his worldview was drenched in a militarized culture that has animated large swaths of the country after nearly two decades of war and the emergence of law enforcement as a powerful cultural and political constituency. Embedded in that worldview is a “tactical” community with its own symbols and language, built around the idea of constant threat, good guys versus bad guys, and the sacred role of guns in maintaining social order.

In Philadelphia earlier this summer, a meeting between Vice President Mike Pence and the local police union also featured members of the Proud Boys, a right-wing street-fighting gang that often shows up at pro-police protests to brawl with leftists.

When Tucker Carlson set off a firestorm of criticism on Wednesday — by describing a 17-year-old Trump supporter who opened fire on protesters in Kenosha, Wisconsin on Tuesday, killing two, as a well-meaning kid who decided he “had to maintain order” in the Democrat-run state because “no one else would” — the Fox News host was surfacing an idea that had already spread widely on the far-right.

The Intercept: Militia and the Thin Blue Line

We cannot continue to have a justice system that fails to prosecute white collar, corporate and political criminals.

Under the general category of : We Told You.

Joe Biden’s campaign is telling the American people through an advisor and long-time friend of Joe Biden, former Sen. Ted Kaufman, that the Biden administration will not stand up for regular working Americans with economic policy.  “When we get in, the pantry is going to be bare,” said Kaufman speaking to reporters during the Democratic convention.

Kaufman is leading Biden’s transition team.  “When you see what Trump’s done to the deficits…all the deficits that he built with the incredible tax cuts.  We’re going to be limited.”

So the Biden campaign is already laying the groundwork for backing off most of his campaigns economic promises.  Earlier this month, Bloomberg News reported that the Biden campaign had “rolled out a $35 trillion economic program….(that) promises to invest in clean energy and caregiving, buy more made-in-America goods, and start narrowing the country’s racial wealth gaps.”

At the same time, Biden was speaking to his donors and saying that despite his pubic campaign promises, he would not be pushing new legislation to change corporate behavior.  This was not covered by MSNBC, or NPR.

And, after the Kaufman announcement to Wall Street Journal reporters, almost nobody noticed what David Sirota called important signaling that the Biden administration may back off “the entire agenda it is campaigning on.”

For the Democratic Party to return to an austerity model in this economic context is unconscionable.  The outlines of this
“destructive and insane” policy are presented by economist Dean Baker.

Stealing the Vote
The Republicans are using a variety of methods to steal this election. At the moment, the focus is on disenfranchising people because their ballots by mail don’t arrive on time. The Republican party is actively sabotaging the post office to make sure that your ballot doesn’t arrive on time. But, this is just one of the issues.
In Georgia, for example, if the signature you use to sign your mail-in ballot does not match exactly the signature as you wrote it when you got your driver’s license, they can (and I suppose will) throw it out. For example, I use my first two initials and my last name to sign almost everything. It’s quicker and easier. But, I also sometimes write my first name, middle initial and last name. On the ballot I just used in the primary, I signed both ways just to make sure there was no confusion. Today, I learned that this means that my ballot was almost certainly thrown out.
If your signature changes in any way, since you applied for your driver’s license, your ballot can be thrown out.
There are a thousand and one different catches like this that can be used to throw your vote out.
1) ballot arrives late due to post office
2) signatures that don’t exactly match your driver’s license signature
3) having had your name stricken from the voter rolls because a name similar to yours appears in another state. (Read Greg Palast’s book about how many people were purged in Georgia because their first and last names were the same as someone in another state (for example, George Mason). These people were purged even though the Georgia person was named George A. Mason and the Virginia person was George B. Mason; even though the birth dates were different.
4) having been purged from the voter registration roles because you didn’t vote in two elections
This list goes on and on and on. It’s not reading that I especially enjoy, but if you want to understand the true depth of the voter manipulation that is going on, you have to do it. They are depending on people not reading about this, not researching this.
They are also depending on people NOT WANTING TO BELIEVE that the voting system is this terrible. I have had friends, Democrats, get angry, really angry because I tried to tell them about the research demonstrating how much vote manipulation is going on (in this case in Georgia). People get mad because they want to think that all they have to do is vote.
There is a reason the state of Georgia spent a small fortune on complicated new voting machines just before the election. And, there is a reason they made every polling place replace all their signs that said “I voted” with “I secured the vote.”  This is a propaganda campaign to convince people that their vote is counted in a fair election.
To give you just one example: the state of Georgia maintains that you have a paper ballot with these machines . A paper ballot means that your vote can be verified, right? You get a piece of paper printed out with your voting choices on it. You are supposed to check these and make sure they are right before running the paper ballot through the scanner which records your vote.
But, your actual vote, the vote that is recorded by the scanner that you put your ballot through, does not even recognize the printed material. It reads a bar code at the bottom of the page that YOU CANNOT READ. So, just because you check and see in the printed part that you voted for Biden, nothing prevents the bar code from saying you voted for Trump. You would never know.
Just recently, the State of Georgia said that in any recount, the recount would be confined to running the ballots through the scanner again. IF YOUR VOTE WAS RECORDED INCORRECTLY IN THE BAR CODE, RUNNING IT THROUGH THE SCANNER AGAIN ISN’T GOING TO CHANGE THAT.
The State of Georgia (run by the criminal Brian Kemp) was explicit. Any recount would involve ONLY running the ballots through the scanner again.
We cannot just assume that “overwhelming voter turn out” will win this election for us. Voter turnout means nothing if your vote is not counted, or counted incorrectly.